Green Malay capsules are a product of manufactured Kratom from Southeast Asia in Malaysia. Malaysia is a large region covering much of the southern Malay Peninsula, which is located just south of Thailand’s border. At the top of the Malay Peninsula is Singapore which is connected by a causeway. These tropical regions are known throughout the industry as being one of the very best sources of Kratom in the world.

How are Green Malay Capsules Made?

In the same fashion as powder, capsules also contain Kratom powder that is extracted from the green-veined leaves of the Kratom tree. The leaves are harvested by collectors and sent to a drying facility where it is dried in the dark indoors and generally under controlled room temperatures with the aid of air conditioning and fans. Once the green veined leaves are dry, they are taken outside where it is subjected to varying times under the sun and in the shade.

After the leaves are fully dry, they are ground into a fine powder with a texture much like flour. Raw Kratom powder is then typically packaged and sent to manufacturing facilities where it is subjected to laboratory testing and other practices such as fermentation and extraction for tinctures and other products. State-of-the-art encapsulation equipment is then used to fill the capsules with lab-tested Kratom and distributed to various retailers and vendors throughout the Kratom industry.

How Many Grams Do Each Green Malay Capsule Contain?

Depending on the manufacturer, the amount of grams per capsule can vary widely with some ranging from 1-4 grams or more. However, the standard amount of grams per capsule in the consumer marketplace today is 1gram/950ml per capsule. Some people like to buy the powder and make their own Green Malay capsules, but this process is oftentimes very time-consuming and not worth the hassle; therefore, most people just buy them already manufactured.

Where’s the Best Source for Getting Green Malay Capsules?

It’s important to understand that Green Malay is a very popular Kratom product that is not regulated by the FDA; therefore, some companies take advantage of this situation and use fillers and additives in their Kratom products in order to make more money. And worse yet, these imitation Kratom products are not lab-tested, so buying certain Green Malay capsules may come with additives and disappointments.

Fortunately, that is not the case here at Austin Vibes, we only sell lab-tested Green Malay capsules ensuring the highest of quality and industry standards. Austin Vibes is a trusted vendor with a reputation for providing high-quality Kratom products, even the rare and hard-to-find strains. Hands down, Austin Vibes is the best source for getting Green Malay capsules, and that’s according to our thousands of satisfied customers.

Amazing feeling. Awesome product would buy it again and recommend it to a friend. 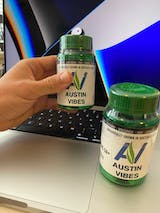 R
Ryza
IT WORKS for me

I get headaches often and sometimes medicine doesn’t work. My friend gave me Kratom capsules to try and it worked! So, the very next day I ordered my own bottle!! Thankful for this recommendation so I recommend for everyone.

Consistently great quality. Super fast shipping and customer service is the best. Would rate higher than 5 if it let me. Highly recommend!

You get what you pay for I’d recommend this product and the company it comes from. Fantastic customer service!!

Great for pain, great for energy, whether morning or night. I really like it, thank you..